You are here: Home / Africa / Somalia bombs al-Shabaab from the air for first time 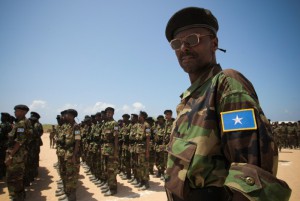 Somalia on Monday bombed positions of the Islamist terrorist group al-Shabaab from the air for the first time, killing a senior commander and several other people, security officials said.

The attack targeted the southern town of Baardheere, a key al-Shabaab base. Bombs hit a location where al-Shabaab members were meeting, as well as a nearby police station.

Those killed included senior al-Shabaab commander Yusuf Hagi, said an intelligence officer who asked not to be named.

The bombing was in retaliation for a foiled attack on a compound of the National Intelligence and Security Agency (NISA) in Mogadishu on Sunday, security officials said.

The Somali army, which is being rebuilt as the country gradually recovers from two decades of clan warfare, does not yet have bomber planes.

Analysts said the war planes may have been supplied by the United States, which has previously used its drones to fight al-Shabaab in Somalia.