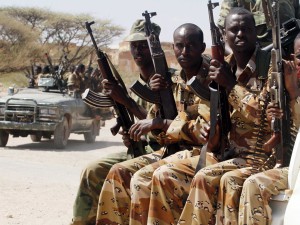 At least three off-duty Somali soldiers were killed by a bomb blast as they collected their pay in the city of Kismayu on Thursday, in an attack that Islamist al Shabaab militants claimed responsibility for, police and the group said.

Al Shabaab, which seeks to overthrow the Western-backed government and impose its strict version of Islamic law, has remained a potent threat in Somalia even after being forced out of the capital Mogadishu in 2011.

The blast came weeks after al Shabaab retook the central Somali town of Buqda and two other settlements this month once African peacekeepers had left the area. In August, a raid on their base killed at least 12 people.

“So far, three officers who were handing out salaries have died and 10 others collecting it have been wounded,” police major Abdirahman Nur told Reuters. “The bomb was planted inside the camp.”

Sheikh Abdiasis Abu Musab, al Shabaab’s spokesman for military operations, said his group was behind Thursday’s explosion inside the barracks.

“We had planted a bomb in a military camp in Kismayu. It exploded as the forces lined up for their salaries this morning,” he told Reuters.

A car bomb at a university that was being used as a base for government troops in the same city killed 16 soldiers late last month.

As well a raids on troops, al Shabaab frequently carries out bombings and gun attacks on officials at offices, hotels or restaurants in Mogadishu and elsewhere.

In an interview with Reuters, President Hassan Sheikh Mohamud said late on Wednesday the settlements retaken by al Shabaab had no strategic value and do not signal a resurgence of the group.

Western diplomats say the group can still pack a punch despite weakening, and it threatens Somalia’s gradual reconstruction.