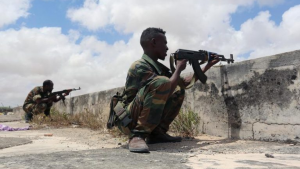 The Somali National Army (SNA) on Wednesday killed six Al-Shabaab militants in an operation in the southern region of Lower Shabelle, a military officer confirmed, like reported by newsaf.cgtn.com.

Abdi Hamid Mohamed Dirir, commander of the Somali infantry division told reporters that SNA conducted a sting operation in villages between Jannale and Qoryoley towns and inflicted casualties on the militants.

“We got intelligence of the militants’presence in the area and our forces advanced towards the area. There was a confrontation between the army and the militants, we overpowered them killing six of them,” Dirir said.

He added that one of those killed in the operation was Abdi Muhsin Hussein, a senior Al-Shabaab fighter.

“Our forces are now controlling the area and the militants have fled towards the forest,” he said.

The latest operation comes barely three days after Somali forces killed three Al-Shabaab militants including a foreign operator from Mali in another operation in the outskirt of Bu’ale town in the country’s southern region of Middle Juba.

Somali forces have intensified operations against Al-Shabaab extremists in southern regions, but the militants still hold swathes of rural areas in those regions conducting ambushes and planting land mines.