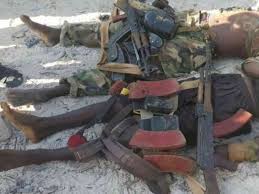 Somali National Army (SNA) killed 37 Al-Shabaab extremists in a fierce fight in the outskirts of Hudur town in the southern region of Bakol, officials confirmed on Sunday.

Odawa Yusuf Rage, commander of SNA told journalists that the clashes started after government forces got intelligence of the militants’ presence in the area and conducted operations.

“Our forces inflicted severe casualties on the militants, killing 37 of them, including the militants’ leader in Hudur area,” Rage said, adding that the army also recovered weapons from the militants.

Locals told Xinhua there was an intense fight in Abal village in the outskirts of Hudur town which caused casualties from the warring sides and the residents.

On May 27, Somali forces backed by the Southwestern State army killed six Al-Shabaab extremists in another operation in Dinsor town in the southern region of Bay.

Government forces have intensified operations against Al-Shabaab extremists in the southern regions, but the militants still hold swathes of rural areas in those regions conducting ambushes and planting land mines.