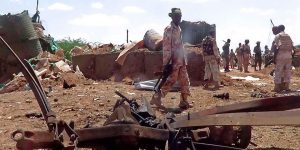 The Somali National Army (SNA) said Monday that its forces killed 10 Al-Shabaab militants in an operation in Hiran, a region in the central part of the country, like reported by nation.africa.com.

Mohamud Hassan, commander of SNA 27th Division, said troops have intensified an onslaught to flush out the Al-Qaeda-allied terror group in the region.

Hassan told Radio Mogadishu that the operation Monday morning was conducted in Omaad, a village in Mahas district where terrorists were hiding.

On Sunday, the SNA said its forces killed seven Al-Shabaab militants and destroyed their hideouts during operations at Qulale, a village near Mahas district.

In recent days, SNA forces have intensified operations against Al-Shabaab extremists in the southern regions where militants hide, conducting ambushes and planting landmines.