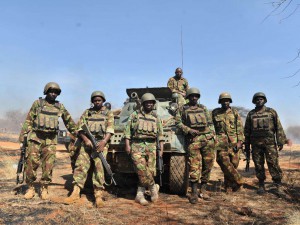 The African Union Mission in Somalia (AMISOM) has said it will require at least 4,000 more troops  from African countries in order to further liberate remaining regions of Somalia from the dreaded Islamic terrorist group Al-Shabab.

The need to further decimate the ranks of the terrorist group becomes more needful as Somalia prepares for its first democratic elections in over 20 years in a conflict which has seen millions of the citizens become refugees all over the world.

Somalia has one of the world’s most complicated democratic processes where clans and family heads elect members of parliament who in turn would elect the President. In the past two months, clans have been electing their representatives to the parliament while the presidential elections will hold before December 2016.

AMISOM spokesperson in Somalia, Lieutenant Colonel Joseph Kibet told The Nation that security for the election is paramount for the AMISOM troops. “Security is calm now even though it is unpredictable, we have been able to drive Al-Shabab out of Mogadishu, but we are yet to liberate Juba Valley from them, also Bakoo and Hiraan and along the coastline.

“What they are doing now is to carry our insurgency attacks using vehicle bombs and laying ambush for our troops, but we are in control of the situation and hopefully we will be able to drive them out. Currently, we have 21,000 troops and for maximum effect we need to double that but for the immediate job at hand we will need minimum 4,000 troops,” Kibet said.

As Somalia prepares for the election, a result of which will have far reaching consequences for the fragile peace of the war-torn country, Al-Shabab continues to intimidate and plan attacks to disrupt the process.

“What they are doing now to stop the election is to intimidate and kill prominent leaders in the country, they acquired Somali National Army uniforms and identity cards but we have been arresting them, we have launched a counter-Improvised Explosive Devices (IED) strategy and more than 70 of them have been discovered.  It is a struggle against a determined enemy, but we are also determined,” Kibet revealed.

Also more than 140  Nigeria Mobile Policemen will be providing security for the elections, Nigeria has been mainly responsible for rebuilding the Somalia Police Force after the war.

The spokesperson for the government of Somalia capital Mogadishu, Abdulfatir Oman Halare said the government is optimistic the indirect elections will be successful. “We are ready to hold the indirect elections not only in Mogadishu but also all over the country. The process has been on for a long time and nothing has happened to stop it, the Somali people hate Al-shabab and they have been giving us information about them, we have been arresting them and diminishing their ranks,” he said.

Even though the city of Mogadishu still bears the ruins of decades of conflict, it was evident the people want to move on to better things. Large political billboards occupy strategic locations in the city and the candidates have been mobilizing the people to vote in an election that may determine the future of the country.