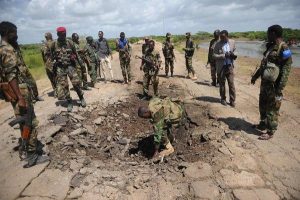 Seven people were wounded after a mortar attack by al-Shabab militants hit the area around Mogadishu airport, Somali witnesses and officials say according to voanews.com.

The mortars landed on the heavily-guarded Halane area of the airport that houses the African Union and United Nations Mission in Somalia.

The al-Shabab militant group claimed responsibility for the attack.

The Special Representative of the U.N. Secretary-General for Somalia, James Swan, confirmed that the mortars landed inside the U.N. and AMISOM facilities.

“I am appalled by this blatant act of terrorism against our personnel, who work together with the Somali people on humanitarian, peace building, and development issues,” Swan said in a statement. “There is no justification for such despicable acts of violence, and the United Nations remains determined to support Somalia on its path to peace, stability and development.”

Al-Shabab uses mobile vehicles that transport mortars from one location to another. The mortars are then dissembled immediately after being fired and hidden in the bush or in a car, according to security sources.

The attack on Sunday comes a day before Somalia marks the deadliest terrorist attack in Somalia and in Africa.

October 14 is the second anniversary of the truck bomb in Mogadishu that killed 587 people and injured hundreds of others.