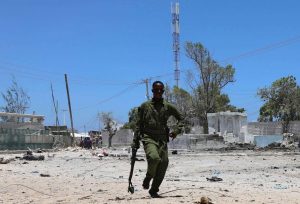 At least seven people were killed in two separate attacks by the al-Shabab militant group in Somalia in the last 24 hours, like reported by voanews.com.

The deadliest attack took place in the town of Wanlaweyn, 90 kilometers west of Mogadishu, when an improvised explosive device planted near the home of a military officer exploded on Saturday evening. Moments later a second explosion went off as people gathered at the scene of the first explosion.

Five people were killed including the wife of the military officer who was not at home at the time.

“The wife of the officer has died, may Allah give him strength,” he said. “Her elder son is among the wounded.”

Yusuf said several suspects were arrested and investigation is ongoing.

Separately, a suicide car bomb exploded at a checkpoint outside a military base in the town of Ba’adweyne, 170 kilometers southeast of Galkayo town in central Somalia, early on Sunday morning. Residents told VOA Somali that two soldiers were killed, although military officials deny any of them were hurt.

The commander of the 21st Division of the Somali National Army General Abdiaziz Abdullahi Hogollof told VOA Somali that the soldiers at the entrance of the base were ready and prevented the explosive-laden car from penetrating.

Al-Shabab claimed responsibility for both attacks.