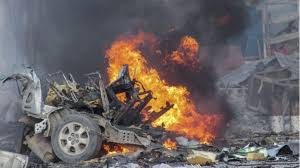 A Somali police officer says a blast at a busy market in the western part of Somalia’s capital killed at least 15 people, like reported by ap.org.

Capt. Mohamed Hussein said the powerful blast thought to be from a car bomb tore through shops and food stands in Mogadishu’s Madina district Sunday. He said the bomb also wounded more than 10 others and casualties may rise as many of the wounded victims suffered horrific wounds.

No group has yet claimed responsibility for the blast. However, Somalia’s homegrown Islamic extremist rebels, al-Shabab, often carry out such attacks.

Despite being ousted from large parts of south and central Somalia, al-Shabab continues to carry out guerrilla attacks in this Horn of Africa nation.