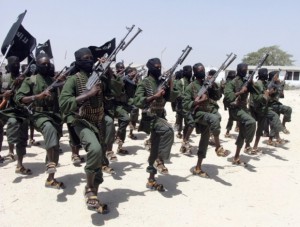 Heavily-armed al-Shabaab militants overran an African Union base in southern Somalia yesterday, a military official said, in the latest display of the I­slamists’ capacity to hit back amid a prolonged offensive against them.

The attack started in the small farming town of Janale situated about 90 kilometres (54 miles) south of the capital, Mogadishu, with a suicide car bombing at the base’s gate, followed by a firefight which lasted more than an hour, said Somali Colonel Ahmed Hassan.

The African Union (AU) force in Somalia, known by its acronym, Amisom, claimed on ­Twitter that it was still in control of the base.

However, Col Hassan said the militants overran the base after bombing a nearby bridge to prevent troops escaping.

The al-Qaeda-aligned militant group said it killed about 50 AU troops from Uganda at the base and injured scores more. Al-Shabaab spokesman Abdiaziz Abu Musab told the group’s online Andalus radio station that the Ugandan contingent was targeted in retaliation for the alleged killings by Ugandan troops of six men at a wedding in the nearby Somali port town of Merka in July.

“Now Janale base of Amisom is under our control,” Mr Musab said.

“Very few escaped,” he added, referring to the Ugandan troops. “Others swam into the [Shabelle] river and drowned. Others might have escaped into the ­jungle.”

Resident Ahmed Olow said: “After morning prayers we heard a big explosion followed by heavy gunfire in the Amisom base. We do not have further ­details as we are indoors.”

Captain Bilow Idow, a Somali military officer based in a town near Janale, said that the militants had cut off the base by blowing up a nearby bridge.

“No reinforcement can reach there,” Capt Idow said. “There is much death and damage.”

The militants reportedly allowed villagers to loot AU soldiers’ food supplies after the base was overrun by the al-Shabaab insurgents, residents said.

The Washington-based group Human Rights Watch last month urged an investigation into the wedding killings and called on the Ugandan government to prosecute any of its soldiers responsible for criminal offences.

Despite losing possession of most of the capital and most of its key strongholds in south and central Somalia in recent years, al-Shabaab continues to carry out attacks on the government and AU troops across the Horn of Africa nation.

In June, al-Shabaab fighters overran another AU base in Lego, a small town in the Lower Shabelle region of southern Somalia, killing dozens of soldiers and seizing military armaments.

Shortly after that attack, the group claimed responsibility for a car bombing near the Jazeera Hotel in Mogadishu, killing at least ten people.

US President Barack Obama said during his recent visit to Nairobi, in neighbouring Kenya, that while al-Shabaab had been “weakened”, it still posed a regional security threat.

Al-Shabaab, which wants to topple a western-backed government and impose its own strict interpretation of Islam on Somalia, has also carried out attacks against neighbouring Kenya and Uganda as punishment for sending troops to Somalia as part of the AU peacekeeping force. Al-Shabaab already controls parts of Janale.