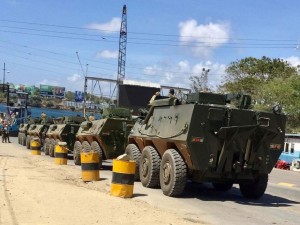 The Kenya Defence Forces has maintained that only nine officers were killed during the al Shabaab attack on Kolibyow base in Somalia, like reported by the-star.co.ke.

KDF, in a statement, said another 15 soldiers were injured during the fierce engagement and had been evacuated to Nairobi for medical attention.

“Fifteen KDF soldiers who were injured during the engagement have been evacuated to Defence Forces Memorial Hospital for further medical attention,” he said.

There had been earlier reports that dozens of soldiers were killed at the camp, but Njuguna said KDF soldiers operating under Amisom successfully defended the military camp.

“KDF’s quick reaction force, land and air forces arrived at the Kolbiyow camp early this morning and reinforced the defence and pursuit efforts” he said.

“A wave of terrorists supported by two vehicles Borne Improvised Explosive Devices (VBIED) attempted to attack the camp but the attempt was unsuccessful,” the spokesman said.

KDF have launched a hot pursuit on the ones who managed to flee.

“The KDF soldiers remain vigilant and will continue to relentlessly pursue the terrorists to ensure peace and security of our country Kenya, as well as support Amisom operations in order to stabilize Somalia,” he noted.

Al Shabaab said its fighters killed at least 66 people, adding they overran the camp near the Kenyan border.

The militant group also said it lost fighters but did not give numbers.