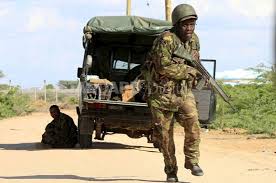 Seven KDF soldiers from Garissa county were killed in the ambush by al Shabaab in El Adde, Somalia, Aden Duale has said.

The number the Garissa Town MP gave is unconfirmed as the Kenya Defence Forces is yet to release the official number of soldiers killed in the January 15 attack.

A monument in honour of 26 troops killed in the line of duty was erected at Moi Barracks in Eldoret on Wednesday when a memorial service was also held.

Duale reiterated a declaration by several leaders that Kenya, whose soldiers are part of the African Union peacekeeping force in Somalia, will not be cowed by the al Qaeda-linked militants.

Kenyans must unite and stand firm against terrorists whose agenda is division on religious lines, he said, and urged Northeastern leaders and residents to support regional coordinator Mohamud Saleh’s security team.

Regarding Garissa University College where 147 people were killed and 79 injured on April 2, 2015, Duale said the region’s leaders “will do anything and everything in their power” to ensure the school runs.

He spoke at the university on Friday when he accompanied Water Cabinet Secretary Eugene Wamalwa in a tour.

The MP lauded Water CS Eugene Wamalwa for touring the county for the second time since he took office in July 2015.

“We want to see the Health minister open a hospital at the university, the Lands minister present a title deed to the institution, the Infrastructure minister commission the construction of roads in the university and the Energy minister launch streets lights,” he said.

“It is time for our Cabinet Secretaries to stand with us in this mammoth campaign to help Garissa university get back on its feet,” he said.

Duale cautioned a member of the Moi University senate against sacking the institution’s support staff. Garissa university is a constituent college of Moi University

“When everyone else left after the terror attack, the support staff remained behind and kept the compound neat,” he said.

“You cannot purport to sack them now. These are the men and women who kept this institution going. I am telling that council member that you cannot sack the support staff now.”