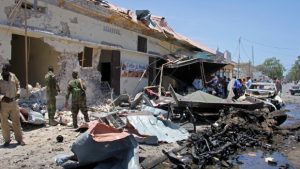 At least 20 people – mostly women – travelling in a minibus were killed after a roadside bomb exploded in Lower Shabelle in southern Somalia, like reported by ibtimes.co.uk.

Governor Ibrahim Aden Ali of Lower Shabelle termed the incident a “national disaster” and blamed al-Qaeda linked al-Shabaab militant group for the blast. However, the group has denied any involvement in the incident.

The explosion occurred just hours after President Mohamed Abdullahi Mohamed replaced his security chiefs and called on members of the militant group to surrender within 60 days in return for education and jobs, according to Reuters.

The president, who was elected in February, haspromised to protect citizens affected by the militant group. Large parts of Lower Shabelle region were under the control of al-Shabaab and the government has deployed a 22,000-strong African Union force in the region to counter the terrorists, the Associated Press reported.

Meanwhile, regional security official Nur Abdullahi told the AP that six people were injured in the blast that almost destroyed the vehicle. The incident took place in the evening near Golweyn village. “It’s a horrible incident. Bodies are lying in a pool of blood, and some of them were burnt beyond recognition,” he noted.

Isaq Haji, a nurse at a hospital in Marka town – located 90km south of capital Mogadishu, told the Associated Press that they had received four victims with “horrific” wounds following the roadside blast.

However, denying any role in the blast, al-Shabaab governor for the Lower Shabelle region, Mohamed Abu Usama, told Reuters by phone that their fighters were not at the village where the blast took place. He also claimed that eight people had died in the attack.

“We do not control Golweyn village and its surroundings. It is a battlefield between our mujahideen (jihadist fighters) and the so-called government forces,” he said.