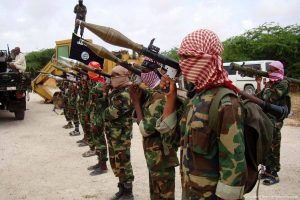 A suicide bomber disguised as a policeman blew himself up inside a police training camp in Somalia’s capital Mogadishu this morning and killed at least 15 officers, officials said, middleeastmonitor.com.

“So far 15 have died and 17 others were injured,” Abdullahi Nur, another police official, told Reuters.

Earlier, the head of a local ambulance service said they had moved the bodies of 13 victims as well as 15 injured people.

The militant Islamist group Al-Shabaab claimed responsibility for the attack and gave a higher death toll.

The group, which is allied to Al-Qaeda, is waging an insurgency against the UN-backed government and its African Union allies in a bid to topple the weak administration and impose its own strict interpretation of Islam.

The militants were driven out of Mogadishu in 2011 and have since been steadily losing territory to the combined forces of African Union peacekeepers and Somali security forces.