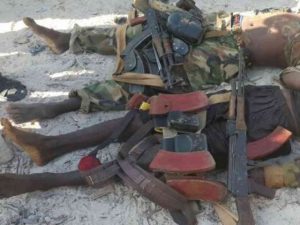 At least 13 militants of Somali-based al-Qaeda affiliated group al-Shabaab were killed, and several others wounded in a military operation against the group in lower Shabelle region.

Somalia’s specially-trained forces known as Danab conducted a military operation at al-Shabaab facilities near the town of Leego, located in the northwest of the capital Mogadishu, according to Somali military radio.

Ismail Abdimalik Malin, a senior military commander in the region said, “Our specially-trained units from Danab had conducted an operation against terrorist group al-Shabaab that killed 13 militants and wounded several others.”

Our aim was to target the militants and kill its commanders and at this time the operation was quick and devastating, he added.

The operation came days after some special forces units which were trained in Turkey returned to the country.

Gen. Adawa Yusuf Rage, a Somali armed forces commander, said: “I want to thank our Turkish brothers for their help to train these special forces, this unit will help us fight against al-Shabaab.”