You are here: Home / Africa / Somalia: 10 killed after fighting between Al-Shabab and residents 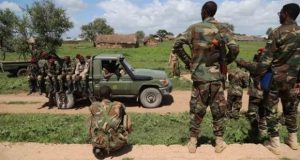 At least 10 people were killed and five others were wounded in fighting between al-Shabab and armed residents in Somalia’s central region of Mudug, witnesses and officials said according to voanews.com.

The fighting started Wednesday after heavily-armed al-Shabab militants, who control parts of the region, tried to impose taxes on the residents of Shabellow village. It’s about 20 kilometers west of the Ba’ad weyn district, a base for the 21st division of the Somali National Army.

“Heavily-armed al-Shabab members first asked us to pass through our village, but in fact we found out they wanted to seize our village and we confronted them,” the head of the village, Mohamed Ibrahim, told VOA by phone.

Ibrahim said eight of the residents and a number of al-Shabab militants were killed in the fighting.

“They [al-Shabab] killed eight civilians, including elders who could not run away, and women, and I saw the dead bodies of six of al-Shabab fighters,” Ibrahim said.

Residents said the militants briefly took control of the village and burned houses and businesses.

Al-Shabab militants have claimed responsibility of the attack, describing the village as a Somali military base, a claim denied by residents.

Yonis Mohamed Shaare, a Galmudug state lawmaker, described what happed today as the massacre of civilians.

“The militants knew there was a military base 20 kilometers from the village but instead they attacked this village, massacring innocent civilians,” Shaare said.

Earlier this year, the villagers, who already are struggling economically after losing hundreds of livestock in the country’s drought, dismissed the militants’ demand for taxes.

Villagers and pastoralists in several areas in central Somalia in the past took up arms against al-Shabab fighters, who wanted to loot their resources, including livestock.