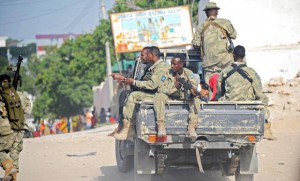 Somalia’s security agency said  it carried out a night raid on key targets inside an Al-Shabab-controlled town in southern Somalia, targeting “senior” commanders.

Internal security spokesman Mohamed Yusuf Osman said that members of the US-trained National Intelligence and Security Agency (NISA) carried out the attack inside Bardhere town, a stronghold of the Somali-led Al-Qaeda affiliate in Gedo region.

“The specially trained security forces have carried out a well orchestrated attack at key targets inside Bardhere district and they have returned safely after the operation,” he said.

Osman said a police station and the district headquarters used by Al-Shabab fighters and leaders were targeted in the raid.

“Our forces interrupted a very senior level meeting of (Al-Shabab) leaders. The intelligence we had indicated the meeting was to plan for more attacks in Somalia and Kenya,” NISA said in an e-mailed statement, which described the raid as “retaliation” for an Al-Shabab attack in Mogadishu on Sunday.

NISA sources said that an Al-Shabab leader known as Yusuf Haji was killed in the operation and they were working to confirm whether senior Al-Shabab commanders, including intelligence chief Mahad Karate and Kenyan university massacre mastermind Mohamed Mohamud — also known by the aliases ‘Dulyadin’ and ‘Kuno’ — were in the building at the time of the raid.

Witnesses in Bardhere said loud explosions were heard during the night. “We have heard several explosions, but it is very difficult to know more because heavily armed Al-Shabab militants are patrolling in the streets,” said Hashi Aw Adan, a resident.

US drone strikes have targeted and killed a string of Al-Shabab leaders in recent months, including the group’s emir Ahmed Abdi Godane, in September 2014, but a ground assault inside Al-Shabab territory is unusual.

Under pressure in Somalia, the Al-Shabab is increasingly turning its attention to Kenya. In its bloodiest attack to date four Al-Shabab gunmen killed nearly 150 people, mostly students, in an attack on a university in Garissa, northeastern Kenya, in April.