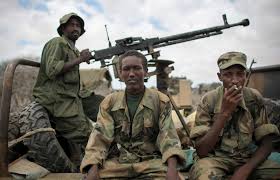 Somali government troops and African Union peacekeepers on Saturday, February 6 recaptured the key port of Merka from Shebab insurgents, just one day after the Islamists swept into the city, the army and witnesses said, according to AFP.

“The Somali forces and AMISOM peacekeepers secured control of Merka again and now the situation has returned to normal,” a Somali military official, Abdirisak Mohamed, told AFP by telephone from Mogadishu.

“There was brief exchange of gunfire, but the (Shebab) militants have fled.”

Shebab insurgents took their former stronghold of Merka on Friday from African Union troops who pulled out of the port they had held for three-and-a-half years.

The historic port, some 100 kilometers south of the capital Mogadishu, was captured in August 2012 by African Union troops. It is one of the first major towns the Shebab have seized back and it gives them access to a sea port again.