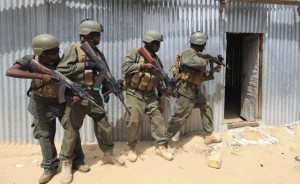 Security Ministry spokesman Mohamed Yusuf told Xinhua that they received intelligence information indicating that members of the Al-Shabaab hiding in secret locations in the Lower Shabelle region of southern Somalia.

“We were able to eliminate secret sites which Al-Shabaab carried out its subversive operations against government in the capital and other regions,” he said.

“The joint operation was conducted by government forces and the African peacekeeping forces, the militants fled the sites. We will continue our efforts until we can eliminate them,” the spokesman added.

The Somali government is facing security challenges from Al-Qaida linked group Al-Shabab despite the group recently had lost key towns in southern Somalia.