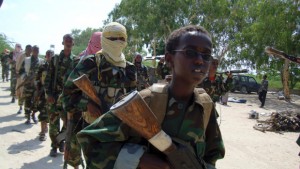 Somali Islamist group al Shabaab was behind an attack on a government building in Mogadishu on Tuesday that houses the Higher Education and Petroleum Ministries, a spokesman from the group said according to JP.

“We are inside and fighting goes on,” Sheikh Abdiasis Abu Musab, al Shabaab’s military operations spokesman, told Reuters after attackers set off two blasts before gunmen stormed inside.