You are here: Home / Africa / Somali general and seven of his bodyguards killed by an Al-Shabab suicide bomb car attack 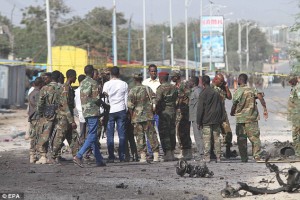 A Somali general and at least seven of his bodyguards have been killed by a suicide car bomber.

Al-Shabab, an Al Qaeda aligned jihadist group, claimed responsibility for the attack and accused the general of plotting against them.

The terror group staged the attack in the build-up to a vote for a new parliament and president, part of efforts to build a nation that has been ripped apart by two decades of war and chaos.

Security official Abdiaziz Mohamed said: ‘There was a heavy blast caused by a car loaded with explosives alongside the industrial road, several members of the military were killed in the incident including a senior commander.’

Witness Abdi Hassan added: ‘The blast was very huge, I saw smoke and fire overshadowing the whole area. General Gobale was killed in the suicide attack.’

Somalia’s Andalus radio, which is linked to Al-Shabab, said ‘a mujahid (fighter) was martyred as his suicide car bomb killed General Goobaanle.’

Last month, an Al-Shabab truck bomb exploded outside the Somali presidential palace and a popular hotel in Mogadishu, killing at least 15 people.

Al Shabab wants to turn the country into a fundamentalist Islamic state and is trying to topple the Western-backed government of President Hassan Sheikh Mohamud, who is seeking re-election in the upcoming vote.

Voting for the 275-seat parliament is scheduled to start on September 25 and end on October 10, with new lawmakers sworn in on October 30.

Those lawmakers will, in turn, pick a president on October 30.

Due to security concerns, including the continuing Al-Shabab insurgency, voting will not be based on one-person-one-vote but instead about 14,000 people representing federal states across the nation will choose members of the legislative assembly.

That is a fraction of Somalia’s 11 million people, but is more than the 135 elders who picked the outgoing parliament in 2012.