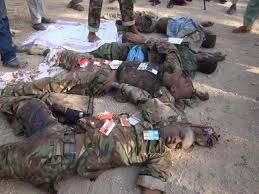 Seven Al-Shabaab fighters were killed Wednesday by Somali forces in the coastal city of Kismayo in southern Somalia, like reported by xinhuanet.com.

Somali military commander in Kismayo, Mukhtar Abdi, told journalists that the forces launched an ambush against the militants following a tip-off in Wirkoy area.

“We got prior information that they were planning to attack us in Wirkoy area. We moved in fast and killed seven Al-Shabaab fighters.”

The commander added that one soldier was injured in the fight which lasted for a short time. The militant group has not commented on the development. Security forces have continued assaults against the militants in southern parts of the country.

Kismayo port which was a major source of income for Al-Shabaab was captured by Kenyan forces in 2012, driving the militants to adjacent towns.