You are here: Home / Africa / Somali ‘bomb-maker’ killed in drone-strike 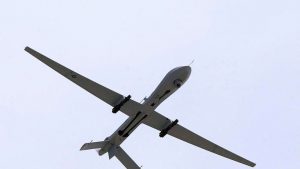 U.S. Forces in Africa allegedly terminated a high-ranking member of the Islamist terrorist faction Al-Shabab in a drone strike, like reported by newsweek.com.

Al-Shabab, which some reports have connected to the Al-Qaeda terrorist group, has been engaged in battles against the Somalian government, which is backed by the United Nations. Al-Shabab was declared a terrorist faction by the U.S. Department of Justice in 2008. The strike launched by the U.S. Africa Command (AFRICOM) resulted in the death of an individual who was allegedly involved with placing IEDs along a Somalian road. AFRICOM did not name the target of the drone strike.

“In support of the Federal Government of Somalia, U.S. forces use a range of effective and appropriate methods to assist in the protection of the Somali people,” read a Thursday statement posted by AFRICOM on Twitter. “Together with partner and allied forces, U.S. Africa Command works on a daily basis to improve security conditions to enhance governance and economic development while preventing Al-Shabaab’s desire to expand their reach and further export violence.”

Along with the Al-Shabab member, the drone strike reportedly destroyed a motorcycle. “U.S. Africa Command currently assesses no civilians were injured or killed as a result of this attack,” the statement continued.

Al-Shabab has claimed responsibility for terrorist acts in Eastern Africa, including a 2016 attack on a Somalian airbase that resulted in the deaths of approximately 180 soldiers. In 2015, Al-Shabab members attacked Garissa University in Kenya and killed 148 Christian students.

On Sunday, Al-Shabab detonated a car bomb in front of the Elite Hotel in Somalia’s capital, Mogadishu, before gunmen entered the property. In the attack, 11 people were killed.

Parliament member and hotel owner Abdullahi Mohamed Nor was on the premises when Al-Shabab began their attack. “May Allah have mercy upon those who perished in the attack which terrorists carried out at the Elite Hotel,” Nor wrote on his Facebook page. “I was at the hotel when the attack happened, may Allah give a quick recovery for the wounded people. I am safe and sound.”