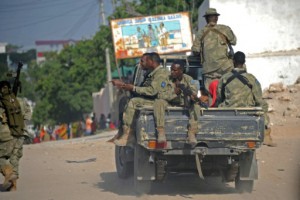 While Dinsor fell without a major fight, with Shebab gunmen fleeing ahead of the assault, witnesses have reported heavy casualties in the week-long offensive with civilians caught up in the fighting. Village elders reported that dozens of bodies have been buried.

“Our forces have secured control of Dinsor, and the insurgents have fled after losing the battle… the troops are now conducting security operations to clear the town,” Somalis’ defence minster, General Abdulkadir Sheikh Ali Dini, told reporters.

The fall of Dinsor, in Somalia’s southwestern region and near the border with Kenya and Ethiopia, comes after the capture by AU troops of the nearby town of Bardhere on Wednesday. The two towns were some of the last remaining Shebab strongholds.

Witnesses confirmed the takeover of the southern town, saying the Shehab fled ahead of government and Ethiopian troops with the AU force, pulling out of the town on Thursday afternoon.

“Most of the residents fled so it looks like a ghost town,” said resident Mohamed Added. “There are very few people remaining, most of them elderly.”

The African Union Mission in Somalia, or AMISOM, last week launched “Operation Jubba Corridor” — an offensive it said was aimed at flushing the insurgents out of rural areas in southern Somalia and which has involved Ethiopian and Kenyan forces. In the southern Bakool region, elders in five villages reported dozens of civilians killed.