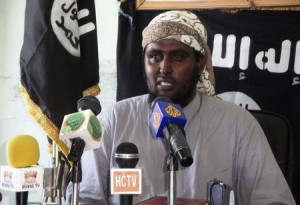 Somalia’s militant Islamist group al Shabaab pledged on Tuesday to greet British troops “with fire” when they arrive to provide support to a peacekeeping force in the conflict-ravaged country.

Last week Prime Minister David Cameron announced plans to deploy up to 70 troops and experts to provide logistical, medical and engineering support to the African Union-led peacekeeping force in Somalia, which is struggling to emerge from two decades of chaos and is also battling the Islamist insurgency of the al Qaeda-linked al Shabaab.

Like other Western powers, Britain has long avoided the Horn of Africa country, which until recently was widely viewed as a failed state, but it has made some progress in restoring order and setting up a functioning government.

“We hope we shall see the beheaded bodies of whites,” Sheikh Ali Mohamud Rage, al Shabaab’s spokesman, said in a radio broadcast.

The statement branded Britain “an enemy to Muslims” and accused the country of trying to colonise Somalia.

“We shall welcome British forces with fire and you will see their dead bodies displayed on the web pages,” he said.

A spokesperson for the British High Commission in Nairobi, Kenya, declined to comment.

African peacekeeping forces drove al Shabaab out of the Somali capital Mogadishu in 2011, but the group has waged a series of gun and grenade attacks to try to overthrow the government and impose its strict version of sharia law.

AMISOM, the African Union’s force in Somalia, has been battling al Shabaab alongside the Somali army, pushing the rebels into increasingly smaller pockets of territory.