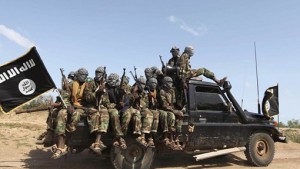 Somalia’s al Shabaab Islamist group said on Sunday it had captured some Kenyan soldiers during an attack last week on a military base in the west of Somalia near the Kenyan border.

The group, which did not say how many soldiers were held after Friday’s assault, also said in a statement that more than 100 Kenyan soldiers were killed, revising up the number from the more than the 63 dead it had previously claimed.

There was no immediate comment from the Kenyan military or AMISOM, the African Union force in which the Kenyans serve. Both have offered limited information about the attack. A Kenyan official said on Sunday the army would issue a statement without saying when.

Al Shabaab often cites vastly higher figures than those given by officials. There was no independent death toll.

Kenyan President Uhuru Kenyatta said on Friday that “some of our patriots in uniform” were killed. Interior Minister Joseph Nkaissery said on Saturday the wounded were being evacuated to Nairobi for treatment and bodies of those killed would be brought home. Neither gave figures.

“Mujahideen fighters … stormed the Kenyan base in the early hours of Friday morning, killing more than 100 Kenyan invaders, seizing their weapons and military vehicles and even capturing Kenyan soldiers alive,” al Shabaab said.

AMISOM and Kenyan forces had said al Shabaab attacked a Somali National Army base and AMISOM forces counter-attacked. AMISOM and the Somali army launched a joint offensive last year that has driven al Shabaab from its major strongholds.

Al Shabaab said the attack was in retaliation for the Kenyan “invasion of Muslim lands” and what it said was the army’s “persecution of innocent Muslims” inside Kenya, a reference to the government’s pursuit of suspected militants in the country.

Some critics say the Kenyan authorities often use heavy-handed tactics. The government, which has faced a spate of attacks in Kenya in the past two years or more, insists it acts justly and within the law to deal with a security threat.

Kenyatta has repeatedly said he would not be coerced into withdrawing Kenyan forces from Somalia, saying the troops are protecting Kenya. “With our allies, we will continue in Somalia to fulfil our mission,” he said in Friday’s comments.

The comments were echoed by AMISOM. “Our resolve can only be rejuvenated, to fight on until Somalia is freed of all elements of terror,” AMISOM said on its Twitter feed.