You are here: Home / Mediterranean / Solving the ‘Balkanisation’ of Libya 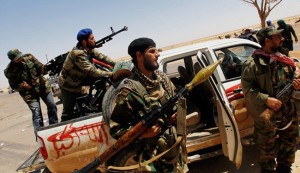 It is time to finally accept what an abject failure the UN and EU has presided over in its misguided attempts to solve the disastrous situations in Libya. It has failed even to protect the spillover into the EU itself. The flotilla of vessels stationed in the Mediterranean with a humanitarian mandate to rescue migrant boats has worsened an already critical migrant problem, encouraging more people to make the dangerous crossing and probably enabling more terrorist sleeper cells reach European shores.

On the ground in Libya, the problem of how to reconcile feuding militias, tribes and towns has proved intractable for the UN. As has erasing extremist elements, including those who believe in the so-called IS group, who continue to see Libya as its Mediterranean base.

Almost no UN agreement has been accepted by all parties in Libya and the international community – with its increasingly-evident ignorance of the country – is clearly running out of ideas for ending the turmoil in Libya.

For example, the West’s imposition of an unelected UN-appointed Government of National Accord bestowed with international recognition has proven to be a massive problem in Libya. Intentional or not, such divisive action by the international community have only fuelled divisions and polarisation in the country.

Equally, the West’s ongoing support of the Muslim Brotherhood in Libya has enabled extremism under a variety of guises to thrive, further driving the country to the brink of partition. The West has clung to the same failing strategies and policies for the last five years and both the Libyans themselves and the international community are now facing the prospect of the country’s division into Cyrenaica in the east and Tripolitania in the west, at the very least. A ‘Balkanisation’ of Libya as happened in the former Yugoslavia.

When the guns eventually fall silent in Libya, the international community should grab the opportunity to promote peace and stability in the country with a new approach – creating a Truth and Reconciliation Commission along the lines of that in South Africa, when power was transferred to the African National Congress. For those who see themselves as victims, this has the merit of allowing a cathartic account of their experiences to emerge. Although such a commission could be criticised for allowing amnesty to controversial figures from the former regime, it is starting to look like the only ray of hope for a stable Libya in the future.

As the British learned during the peace process that ended the Troubles in Northern Ireland, bringing a temporary sudden end to violence means swallowing some bitter pills and even negotiating with so-called terrorist elements. Time will tell if that ‘Powell/Blair’ strategy brings about a long term solution in Ireland let alone in other hot spots. I personally doubt it.

However what would help is such a Truth and Reconciliation Commission which would, of course, be adapted to the needs and conditions of Libya and its choice of members – whether exclusively Libyan or a combination of Libyan and international judges, lawyers and human activists – would be critical for its success.

An unnamed senior source at the UN suggested privately last week that even Ayesha Gaddafi, the daughter of the late leader, could be part of such a Truth and Reconciliation Commission. She is highly-educated, more so than her seven brothers were; a practising lawyer and has actually worked at the UN. While some might balk at a member of the Gaddafi family holding such a role, the truth is that such a Commission could only work if all parties were represented.

After suffering years or chaos and carnage, the Libyan people deserve a similar opportunity that millions of South Africans had when they faced the huge task of forgiveness as they transcended from an apartheid State to a one with equal rights for all colours, creeds and ethnic peoples towards a stable democracy.

Libya needs new ideas to solve what appears to be unsolvable problems and, at this point, it needs the international community’s support to promote healing rather than further fuel conflict.

A radical change in the West’s foreign policies to help bring about peaceful outcomes to the dozen or so proxy conflicts currently underway in the world could lead to the future generations finding permanent solutions to problems we have not been able to solve since the First World War, a 100 years ago. Unless the current generation, in particular the US and Russian leadership, wake up and start using diplomacy to bring about world order instead of pursuing failed policies that fuel chaos and conflict, there will not be much left of Libya, Syria or Yemen for future generations.

A new American president next month will have the crucial opportunity to ‘re-set’ global foreign policies, particularly towards countries in the Middle East and North Africa, and start to encourage peace, not war, in the region.