You are here: Home / Mediterranean / Solution to Libya chaos lies within 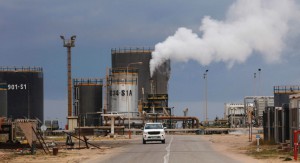 With the world fretting over Syria and Iraq, there has not been much time to worry about Libya, where chaos has been the order of the day for most of the four years since the violent overthrow of the Gaddafi regime.

Part of the reason may have been because Libyan oil production never ceased entirely. However, this continuity does not ultimately explain why Libya remains off the world’s radar screens.

What may be more central to perceptions of Libya is an apparent inability or unwillingness to look at the hard choices necessary for a solution to a seemingly endless crisis.

Somewhat surprisingly, more than 300 oil people this week attended a conference on Libyan oil and gas in London — a turnout that would suggest Libya is a major oil destination. And, last week, the United Nations finally came up with a unity government proposal that is not being automatically dismissed.

The talk in London was of potential oil and gas projects, including some ongoing exploration and development in regions relatively safe from fighting.

National Oil Corporation chairman Mustafa Sanalla spoke of 2 million barrels per day output in “the next few years” and of major development in offshore areas.

There has, unexpectedly, been some exploration activity in the past couple of years, and a few discoveries. The Libyans say they are even looking at possible unconventional energy sources, such as shale.

When “normality” returns, the Gaddafi-era EPSA investment model will be improved, with longer exploration periods and other modifications. The stress will be on encouraging exploration and development of undeveloped resources through EOR and IOR, Sanalla and other officials say.

BP, which had to declare force majeure over a major gas exploration project in offshore Sirte and onshore Ghadames, describes itself as still “very excited”.

Politically, outside powers have, as in Syria and Iraq, been playing a key role in Libya — especially neighbouring Egypt and distant United Arab Emirates, who are pumping in funds and arms and occasionally taking part in aerial bombardment.

The European powers, led by the French, and the US, whose air forces helped oust Gaddafi, give the impression of helplessly watching from the sidelines, leaving the main diplomatic role to the UN.

The UN, in turn, has in the form of special envoy Bernardino Leon until now been limited to ineffectual hand-wringing while the country burns.

However, as of last week there is a faint glimmer of hope. The latest UN proposal has tried to include the Libya Dawn faction, which has ruled Tripoli for the last couple of years after ousting the legitimate but ineffectual government now in exile in the east.

This faction is unfortunately not united, with the main Misrata-based group accepting the latest UN offer and the more unpredictable Zintan-based faction rejecting it.

A vote is expected in parliament in Tripoli.

Meanwhile, in the far east, the ousted government and parliament are objecting to the inclusion of Libya Dawn — an earlier UN proposal in June was voted down.

One key factor in the east is the rise of Khalifa Haftar, a rogue former Gaddafi general, whose military campaign — with Egyptian and UAE support — against what he claims are Islamic extremists seems only to have created the conditions for the rise of the Islamic State and other extremists.

Outside powers may have been the key to the Libyan revolution.

However, they now have to stop interfering if there is to be a resolution and return to normality.