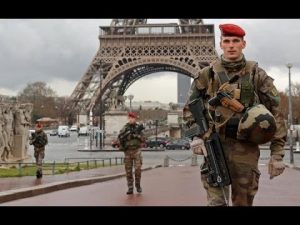 The use of armed soldiers to patrol alongside pavement cafes and selfie-snapping tourists in European cities since jihadi attacks risks compromising deployments overseas, military leaders say according to reuters.com.

Belgium and major military power France, both active in EU and NATO missions, have cut back training to free up troops and NATO planners fear that over time armies may get better at guarding railway stations and airports than fighting wars.

Some of the more than 15,000 soldiers serving at home in Europe say tramping the streets is a far cry from the foreign adventures they signed up for and that they feel powerless to defend against militants.

“We are standing around like flowers pots, just waiting to be smashed,” said an officer just returned from Afghanistan for guard duty in Belgium, which, like France, has more troops deployed at home than in any single mission abroad.

Security personnel have been targeted in both countries but patrols begun as a temporary measure after Islamic State attacks in 2015 have become permanent fixtures as opinion polls show that people are reassured by soldiers on show at home.

Italy has had soldiers on the streets since 2008, Britain used them briefly this year and, along with Spain, is prepared for deployments if threat levels rise. Despite their painful history, Germany and Austria have debated having military patrols at home for the first time since World War Two.

Across Europe, political debate is shifting from whether, to how to adapt the armed forces to a homeland role, a concern for military leaders eyeing budgets, morale and training.

France’s former military chief, who quit in July, said it had overstretched the army, while the head of Belgium’s land forces told Reuters the domestic deployment was taking its toll.

“I see a lot of people who leave our defence forces because of the operation,” General Marc Thys, the commander of Belgium’s land forces, said in an interview, without giving numbers.

Not everyone agrees. A defence ministry source in Italy said its domestic patrols had “absolutely no impact on overseas missions or on training”.

But some in NATO worry protracted domestic operations will make key members of the 29-strong transatlantic alliance less ready to deploy to Afghanistan or eastern European borders with Russia.

“It is popular with the public, it is cheaper than the police,” a senior NATO source said. “But if the requirement came to send a lot of forces to reinforce our eastern allies … would the government be willing to pull its soldiers off the street to do that, could it?”

The challenge of battling Islamic State at home and abroad, squeezes resources just as NATO leaders seek to show U.S. President Donald Trump they are reliable allies, after he repeatedly questioned the alliance’s worth.

Given the homeland operations, some military sources and experts say politicians face a tough choice: to expand the army, summon up reserves or create a new domestic security force – a halfway between the police and military – to replace them as Belgium has chosen to do over the coming years.

“It mobilises so many people that we are having trouble deploying people abroad for U.N. and EU missions,” said a second NATO source.

The operations put 10,000 heavily armed combat troops on the streets in France and 1,800 in Belgium after Islamic State attacks in early 2015. The numbers are down to 7,000 and 1,200 respectively, but they still tie up roughly a tenth of deployable army personnel in each nation.

They can also be bad for morale.

The mix of schools, offices and warehouse hastily converted into barracks in Belgium “are worse than Afghanistan,” said a soldier, showing pictures of cramped rooms piled high with gear.

Some 45 percent of soldiers surveyed by the Belgian military in December said they were thinking of quitting – many to the police – as being away had strained families and led to divorce.

A source in the French military, which has not made polling public, said of its street patrols, known as Operation Sentinelle: “Sentinelle is a burden whose impact on soldiers’ morale we’ve never denied.”

For now, Thys said the Belgian armed forces are not pulling back from foreign missions but have less time for training. “We take everything into account, our homeland operation and our international missions. If you go up on one side, we have to go down on the other side,” Thys told Reuters.

In France, training days were cut from 90 to 59 days last year, according to a defence ministry report in October. A decline of some 30 percent began with the deployment on home soil, experts say.

“The longer they do it, the less sharp as a military they are,” said General Sir Richard Barrons, Britain’s former military chief. “But once you are committed to this it takes a very brave politician to turn it off.”

The new head of France’s armed forces, which has thousands of troops abroad fighting Islamist militants in the Sahel, Iraq, Syria and elsewhere, says something has to give. “We have to choose how to adjust our commitments, to give us back some flexibility, because who knows where the French army will have to deploy in a year,” General Francois Lecointre was cited by local media as saying earlier this month.

President Emmanuel Macron has announced a strategic review of the street patrols. His new armed forces minister, Florence Parly, said on Tuesday they would not be cut but would be made more flexible.

In Italy, where up to 7,000 soldiers help police, a defence ministry source said they were moved around often to keep them from being bored – an approach that France and Belgium will both now put into play.

Italy has escaped militant attacks so far and troops elsewhere have disarmed or killed would-be attackers – such as a knife-wielding assailant outside the Eiffel tower last month and a suitcase bomber in Brussels in June.

But their effectiveness is hard to quantify, and attacks on men in uniform like that in Paris last month – with its familiar pattern of a car ploughing into its victims – has renewed fears they may draw fire or shoot in error.

In France, three in four voters approve of street patrols, although nearly 40 percent doubt they are effective in combating terrorism. In Belgium, support for the military is 80 percent, up from 20 percent before the mission.

But Belgium’s Thys and others see no end to the operations, which give the military an extra argument against years of declining budgets.

“They are part of the landscape now,” said Saad Amrani, chief commissioner and policy adviser of the Belgian Federal Police. “We depend on them.”