You are here: Home / Africa / Soldiers from Chad and Niger kill ‘hundreds’ of Boko Haram militants in push to retake ground 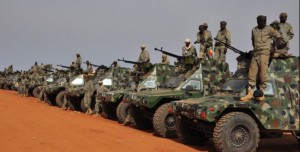 Chad’s army said its forces had killed hundreds of Boko Haram militants and lost nine of its own troops in clashes in northern Nigeria on Wednesday, told CT.com.

Soldiers from Chad and Niger drove the insurgents from Malam Fatori, one of Boko Haram’s last major footholds near Nigeria’s border with Niger, earlier this week. Wednesday’s clashes took place as they were mopping up.

“There was fighting and we recorded nine dead and 16 injured. There were hundreds of dead on Boko Haram’s side,” said Colonel Azem Bermandoa, a spokesman for Chad’s army.

Bermandoa said the fighting had driven militants more than 10 km (6 miles) outside the town, which had been held by the militants since November. There was no immediate comment from Niger’s army on any casualties.

Boko Haram’s bid to create a caliphate in the north-east forced Nigeria to delay in an election due in February. An offensive by Nigerian, Chadian and Nigerien troops has since pushed militants out of most of the towns they previously controlled.

Militants failed to deliver on threats to cause havoc during the rescheduled election, and president-elect Muhammadu Buhari promised on Wednesday to “spare no effort” to defeat the group, which seized swathes of territory under outgoing president Goodluck Jonathan.