You are here: Home / MidEastGulf / ‘Sniper of Mosul’ shoots several ISIS jihadists in four regions of the city 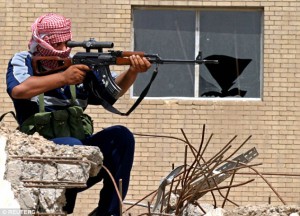 A marksman has shot several ISIS jihadists in four regions of Mosul as uprisings against the group continue.

The gunman, dubbed the ‘Sniper of Mosul’, is said to be hunting down ISIS fanatics while they are on patrol in the city’s streets.

A number of extremists have been injured by the shooter amid reports the attacks are improving morale among Mosul resistance groups.

According to Iraqi News, there may even be more than one sniper at work.

It quotes local media as writing: ‘The emergence of the “Sniper of Mosul”, as the residents call him, increased the pace of the popular resistance against the ISIS.

‘The presence of the sniper in four neighbourhoods emphasizes that there are many snipers and not only one.’

Iraqi forces and Kurdish fighters have launched a major bid to drive ISIS out of its last major stronghold in the country.

It was also reported that local youths are forming militia in a bid to fight extremists from the inside of the city.

Iraqi special forces this morning charged into the Mosul battle with a pre-dawn advance on a nearby town held by ISIS, a key part of a multi-pronged assault on eastern approaches to the besieged city.

The addition of the elite troops, also known as counterterrorism forces, marked a significant intensification of the fight for Iraq’s second-largest city.

More than 25,000 forces, including the Iraqi army, the peshmerga, Sunni tribal fighters and Shiite militias are taking part in the Mosul offensive, which began on Monday after months of preparation.