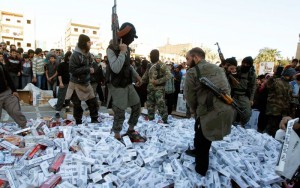 When 34-year-old Ibrahim Hassan was caught smoking a cigarette recently, his punishment was not just eventual ill health. The extremists from the group known as the Islamic State who currently control this city have banned smoking, and Ibrahim was taken to prison for lighting up.

After 24 hours, he was brought before one of the Islamic State group’s self-appointed judges, specialists in the group’s own brand of religious law. The judge fined him 5,000 Iraqi dinars (about $4) and told him off, reminding him of religious verses from the Quran deemed to ban smoking because it can be considered a form of slow suicide.

“I paid the amount reluctantly but I felt lucky compared to other smokers who have been caught—they were flogged,” says Hassan.

When the Islamic State, or ISIS, first took control of Mosul in the middle of last year, it didn’t ban smoking immediately. But that began to change after members of the group’s “morality police” confiscated, then burned, large quantities of cigarettes, began closing coffee shops where men smoked water pipes, and started prosecuting those who smoked in public places.

From the outside it does look like Mosul is succumbing to the restrictive rule of the ISIS—but there all kinds of ways that locals circumvent the ban.

Estimates suggest that in Iraq at least 31 per cent of males smoke (the practice is less acceptable for women and the number is negligible). Mosul was a city of around two million inhabitants before ISIS took it over so one imagines that there are still, literally, hundreds of thousands of frustrated smokers here.

“You can get cigarettes easily enough if you try but it’s not a simple process,” says Abu Qays, a heavy smoker in his 30s. “They’re available in the marketplace but you have to be careful where you buy them and where you keep them, in order to avoid prison or flogging.”

Abu Qays works as a taxi driver and he says he buys, and carefully hides, about a month’s supply at a time. He has also become expert at deceiving the ISIS fighters. “I smoke when I am far from them and I always carry perfume in the car with me so I can disguise the smell,” he explains. “The dogs of the Caliph use their noses to find smokers,” he jokes.

So where are the cigarettes coming from now, seeing as the ISIS fighters did their best to destroy all the stocks in the city months earlier?

“They also come from Iraq’s central and southern provinces,” the merchant told us on condition of anonymity. “Cigarettes are hidden in tankers and oil drums. Most of what is on the market here is really bad quality and it is only meant for smuggling. The risks are high but the profits are very good.”

The traders then get the cigarettes to Mosul’s retailers—and the whole system is based on trust.

Abu Qays says that the mini-mart where he gets his cigarettes has been very successful with the illegal trade. Because the market’s competitors envied the good business, they informed on the mart’s owner to the ISIS group. The morality patrols, or hisbah, place a lot of emphasis on catching smokers. “But he’s very clever at hiding them and also at hiding the tobacco somewhere totally different and far away,” Abu Qays explains.