You are here: Home / Europe / Small minority of migrants entering EU to seek asylum from Syria: who are the other? 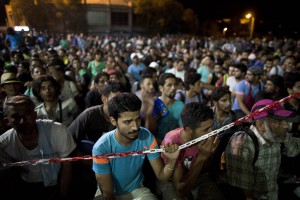 The bulk of migrants seeking asylum in EU countries are not coming from Syria, despite extensive media coverage which may suggest otherwise. Only one-in-five appear to be fleeing the Syrian conflict, according to official figures.

Of 213,000 arrivals in the EU in the second quarter of this year, just 44,000 were from Syria. The second largest group – 27,000 – were from Afghanistan. Another 17,700 claims were made by Albanians, where there is no war or serious civil unrest at present. Meanwhile, 13,900 asylum seekers came from Iraq, where Islamic State and other insurgent groups are active.

The figures have been collated by Eurostat, the EU’s official statistics agency. They also show that migration from April-June was double the level for the same quarter last year.

In the UK the stats have been seized upon by backbench Conservative MPs. “This exposes the lie peddled in some quarters that vast numbers of those reaching Europe are from Syria,” said David Davies, Tory MP for Monmouth, in an interview with the Daily Mail. “Most people who are escaping the war will go to camps in Lebanon or Jordan. Many of those who have opted to risk their lives to come to Europe have done so for economic reasons.”

“These figures make extremely disturbing reading,” said Sir Bill Cash, Tory MP for Stone, said. “The whole argument has been made that this influx is all real refugees from Syria whereas this adds to the substantial evidence that there are a large number of economic migrants who are aiming for a better life.”

So far this year, half a million migrants have arrived in Europe, with 156,000 in August alone. Most arrive in the south of the continent, with around half landing in Greece and Italy, before attempting to travel onward to northern European states. An estimated 3,000 have drowned while trying to cross the Mediterranean.