Anti-tank rockets and mortar shells originally from Slovenian army reserves may have found their way to the battlefields of the Middle East, investigators believe 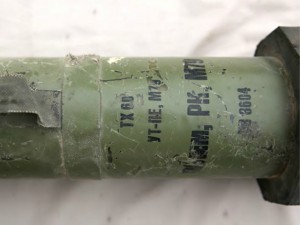 An EU-commissioned team of weapons experts are investigating links between Slovenia’s army stockpiles and ammunition found with Islamic State militants in Iraq and Syria, as well as in Libya.

“We have sent requests to all possible involved parties and are currently investigating other possible supply routes,” Conflict Armament Research, CAR, a group tasked by Brussels with tracing munitions found on the battlefield, told BIRN in a written statement.

In a report published earlier this month, CAR has revealed that an anti-tank rocket found in Libya, one box of mortar shells discovered with Islamic State in Iraq and another rocket found with ISIS in Syria may all have come from Slovenia’s army stocks.

However, the ammunition is believed to have passed through other countries on its route to the Middle East, meaning Slovenia is unlikely to be directly responsible.

All three items were produced in the Yugoslav era and, as a result, equipment with identical lot numbers – numbers that identify a particular batch of items made by one manufacturer – may have been stockpiled in another of the seven former Yugoslav states.

To date, however, only Slovenia has admitted to having stocked ammunition with these lot numbers.

The Ministry of Defence in Ljubljana has admitted that an anti-tank rocket in Libya and mortar shells in Iraq shared lot numbers with equipment previously held in its army stocks.

This is the first time Slovenia’s stockpiles of Yugoslav weapons has been fingered as a potential source of weapons in the Middle East.

The rocket in Libya shared a lot number with more than 100 which were due to be destroyed on behalf of Slovenia’s Ministry of Defence by a now defunct state-owned Slovakian company.

The Slovakian Ministry of Economy in Bratislava said it was now looking into the matter.

In a report, CAR revealed that a M79 rocket that it documented in Tripoli in 2015, with the lot number TB8606, is linked to ammunition previously held by Slovenia’s army.

In a letter sent to CAR and released by the Slovenian authorities to reporters, the Ministry of Defence explains how 132 rockets with the lot number TB8606 were sent to a state-owned Slovakian firm – Vojensky Opravarensy Podnik, VOP – in 2005 for decommissioning.

Authorities in Slovakia and Slovenia said that VOP had provided a document which “detailed the quantities of ammunition it received and destroyed” including the M79 rocket.

Slovenia Ministry of Defence added that it “did not run any additional queries about the CAR findings because there was no reason for it”.

But no other former Yugoslav republic has yet admitted to having stocked these specific rockets, produced in the Tito Vogošća factory in Bosnia and Herzegovina in June 1986, according to the batch number.

This raises the possibility that the rocket had not been destroyed and was later exported to Libya, although no specific allegations have been levelled at any of those involved in the decommissioning process.

Slovakia’s Ministry of Economy said it had not awarded an export licence for these rockets, but added: “We are verifying this.”

In its report, CAR goes on to note that other M79 rockets found with ISIS in Syria may also share a “common source” with the item found in Libya, linked to Slovenia, given that the lot numbers were only two digits apart.

The mortar found with ISIS in Iraq is closely linked to a donation of military equipment to the Afghan army by Slovenia.

Between March and April 2015, anti-ISIS forces in Iraq captured an empty box of Yugoslav-era mortar shells in the city of Tikrit.

According to a letter from the Slovenia Ministry of Defence to CAR, identical mortar shells with the same lot number had been donated to the Afghan National Army in 2008 as part of a NATO programme to arm the embattled force.

These Yugoslav-era mortar shells were produced at the Remontni Zavod factory in Kragujevac, Serbia, in May 1982, according to the lot number.

As with the rockets, some of the mortars in lot RZK8205-1P may have been sent to other Yugoslav republics apart from Slovenia.

If the shell was diverted from Afghanistan to ISIS in Iraq, the discovery will raise important questions about the safety of such donations, particular as countries including Albania and the Czech Republic have made large military gifts to Kurdish forces in Iraq in recent years.

Slovenia’s Ministry of Defence said the mortar shell was to be used in the battlefield between the Afghan army and the Taliban and that “it could have come into the possession of this [Taliban] or other rebel groups”.