You are here: Home / Europe / Slovenia most likely to offer weapons to US-led coalition against Daesh 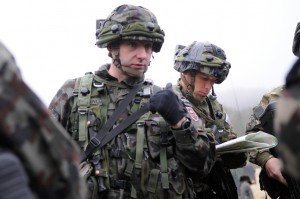 Slovenia will most likely offer weapons and military instructors to the US-led coalition in the fight against the Daesh, which is prohibited in numerous countries including the United States and Russia, Slovenia’s national radio reported Wednesday, citing unofficial sources.

According to the radio broadcast, military instructors will be tasked with training Kurdish soldiers in the Iraqi city of Erbil. The Slovenian government is expected to approve the plan later on Wednesday.

Slovenia is currently not participating in operations against Daesh militants, the broadcaster said.

The Islamic State is a Sunni jihadist group that has acquired large portions of Iraq and Syria and proclaimed an Islamic caliphate there. The advance of the jihadist group is being countered by efforts from Iraqi and Syrian government forces, as well as Kurdish troops and a US-led international coalition conducting airstrikes on Daesh positions.