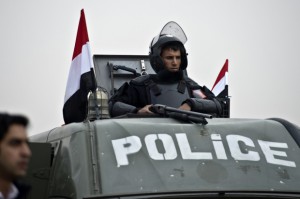 The assailants pulled the policemen out a vehicle in El Obour neighbourhood, south of El Arish city, and shot all five of them dead, security sources said.

In another incident on Saturday morning, nine policemen were injured when an explosive device planted on the road was remotely detonated as the armoured vehicle carrying the conscripts passed in the city of Rafah, security sources said.

One conscript later died of his wounds.

There was no immediate claim of responsibility for the attacks.

A recently-emerged militant group called the Hasm Movement later claimed responsibility for the attack, saying it was in revenge for death sentences handed out to thousands of convicts.

The most populous Arab country is battling an insurgency.

The insurgency, mounted by Daesh’s Egyptian branch Sinai Province, has killed hundreds of soldiers and police and started to attack Western targets within the country.

President Abdel Fattah Al Sisi describes hardliner militancy as an existential threat to Egypt, an ally of the United States.

Daesh controls large parts of Iraq and Syria and has a presence in Libya which borders Egypt.