You are here: Home / Africa / Six killed in Somalia shootings 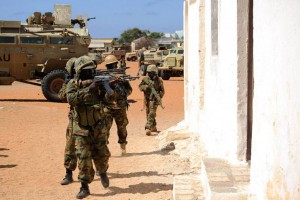 “Six civilians, two of them Turkish nationals, have been killed, and six more were wounded,” said Abdifatah Omar Halane, spokesman for the Mogadishu city authorities.

The shooting took place late Wednesday, and those killed also included the driver and security guards of the Turks.

“We condemn this cowardly act, and our thoughts are with the relatives of the victims and the Turkish government,” Mr Sharmarke said in a statement.

“These innocent Turkish citizens have lost their lives while supporting their Somali brothers.”

Turkey is a major investor in, and donor to, Somalia.

No group has so far claimed responsibility.

In a separate incident on Wednesday, witnesses said four people were killed, including three civilians caught in the crossfire, during a shootout between members of rival units within the Somali army.

“The soldiers were trying to shoot another soldier, but they have killed him together with three civilians who were passing by,” said Abdirasak Ali, a witness. Several other witnesses confirmed the deaths.

Somalia’s Al-Qaeda-affiliated Al-Shabaab rebels — who are fighting to overthrow the country’s internationally-backed government — carry out regular attacks in Mogadishu but the seaside capital is anarchic and is still awash with weapons after decades of war.