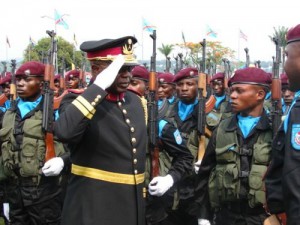 Unidentified gunmen killed six elite presidential guard soldiers on Monday in an ambush in eastern Democratic Republic of Congo, military and local sources said, a region still plagued by violence more than a decade after years of civil war ended.

A military source, who spoke on condition of anonymity, said members of the Republican Guard, responsible for protecting the president and strategic posts, were on their way to collect rations when their jeep came under heavy arms fire on a main road 40 kilometers (25 miles) north of the North Kivu capital of Goma.

“The elements of the Republican Guard fell into an ambush that killed six, and the assailants burned the jeep,” the source said. “We have immediately opened an investigation.”

The governor of North Kivu province was not immediately available for comment.

Eastern Congo, which was ravaged by two wars between 1996 and 2003 that killed millions, most dying from hunger and disease, remains beset by dozens of armed groups who compete over reserves of gold, tin and tantalum.

Rutshuru Territory, where the attack took place, has seen an uptick in violence this year, with dozens kidnapped by armed militias and criminal gangs.

Innocent Gasigwa, a spokesman for a civil society in Rutshuru, said that six soldiers had been killed, three wounded and one taken hostage by the gunmen in the town of Rugari.

He said that fighters from the Democratic Forces for the Liberation of Rwanda (FDLR), a Hutu militia based in eastern Congo since fleeing Rwanda after the 1994 genocide, were active around Rugari.

A spokesman for the FDLR could not be immediately reached for comment.