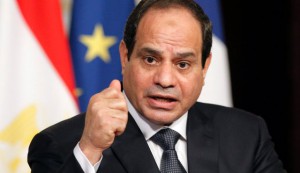 President Abdel Fatah al-Sisi is to participate in a summit on countering the Islamic State (IS) group and violent extremism Tuesday, on the sidelines of the 70th UN General Assembly meetings in New York, Youm7 reported.

Additionally, a delegation from Al-Azhar assigned by Grand Imam Ahmed al-Tayeb is also to participate in the summit.

The delegation plans to present to the summit how Al-Azhar is spreading the culture of moderate Islam of tolerance and peace, and supporting the dialogue between different cultures and civilizations to promote peace.

On Dec. 3, more than 700 Islamic and Christian scholars from 120 states participated in Al-Azhar’s Cairo International Conference on Countering Extremism. During his speech Tayeb said that extremists’ “twisted understanding” of the religion is complex, because they also give themselves the right to declare other Muslims apostates and kill them.

President Sisi called in January for a “religious revolution,” in order to “correct misconceptions” of Islam and to fight extremism.