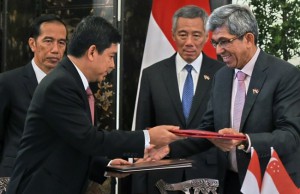 Singapore and Indonesia Tuesday agreed to step up cooperation against ISIS amid fears that militants returning from the Middle East could mount attacks in Southeast Asia.

“We are both worried about ISIS and we both have nationals from our countries involved in these terrorist activities including in the Middle East,” Singapore Prime Minister Lee Hsien Loong said after talks with visiting Indonesian President Joko Widodo.

Shortly after their meeting, Singapore disclosed that a 51-year-old local Muslim, Mustafa Sultan Ali, was deported by Turkey to the city-state in June after attempting to join ISIS, also known as Islamic State, by crossing into Syria.

Widodo said the two leaders “agreed that we will share information and other things that are linked to terrorism and ISIS, because we know that this is a threat to almost all countries.”

Indonesia, which has the world’s largest Muslim population and has long struggled with extremism, fears up to 500 of its citizens have been lured to the Middle East by ISIS.

Singapore is predominantly ethnic Chinese, with 13.3 percent of the population belonging to the Muslim Malay minority.

The Ministry of Home Affairs said the Singaporean deported by Turkey was placed under detention without trial for two years under internal-security laws.

“Investigations showed that Mustafa had been deeply radicalised by the terrorist ideology of ISIS and other radical ideologues he had come across online,” a press statement said.

“He had travelled to Turkey and tried to make his way to Syria in order to participate in armed violence by fighting alongside ISIS. Mustafa also said that he was prepared to carry out ISIS-directed terrorist attacks against Western establishments in Singapore.”

Singapore, one of Asia’s most affluent cities and a regional base for thousands of multinational companies, is seen as a prime target for attacks by militant groups due to its close security links with the United States.