You are here: Home / Mediterranean / Sinai tribal union says ‘will cooperate’ with Egyptian security forces in war on Islamic terrorism 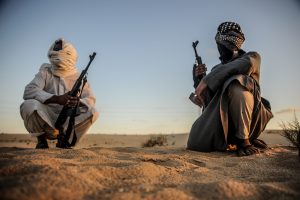 The Union of Sinai Tribes has reaffirmed their support for and cooperation with the Egyptian army and police and said they will cooperate with them “as one hand” to “cleanse” the peninsula of terrorism, like reported by ahram.org.eg.
“We will act soon with our Egyptian armed forces as one hand against terrorist mercenaries,” a Thursday statement by the union read.
The statement is the second by the union since a terrorist attack on Al-Rawda Mosque in North Sinai’s Bir El-Abd last Friday, when terrorists killed 311 worshippers during prayers.
Hours after the massacre on Friday, President Abdel-Fattah El-Sisi gave a speech saying that the military and police will “avenge the martyrs” and respond using the utmost force against terrorists to ensure stability and security.
On Wednesday, the president publicly ordered leaders of the Egyptian army and police to restore stability and security in the peninsula within three months using “brute force.”
The military has launched several strikes against terrorist hideouts in North Sinai this week, including destroying three hideouts on Thursday, according to a military statement.
According to a Thursday statement, the tribal union is preparing, in cooperation with the military and police forces, for the coming battle to “cleanse Sinai of terrorism,” adding that it is every Sinai resident’s right to take part in this battle.
“Any resident who provides terrorists with technical, moral or logistical assistance is considered a legitimate target for us, with the agreement of all the Sinai tribes,” added the statement, which was published on the union’s Facebook page.
The union added that it is responsible for providing protection and a safe haven for any resident who offers information on terror groups.
“The Union of Sinai Tribes calls on every terrorist element who has not yet been involved in attacks on army or police personnel in Sinai to turn themselves in immediately and face the rule of law, or death will be your fate,” the statement warned.
It also called on all Sinai residents to be at maximum readiness for the “zero hour” in the battle against terrorism.
The Sinai tribes had asked to be allowed to fight against terrorist groups alongside the Egyptian army after the Friday attack on Al-Rawda Mosque, which is considered the worst such attack on civilians in Egypt’s recent history.
An initial statement issued by the Sinai Tribes Union following the Al-Rawda attack said that the tribes will exact revenge on all terrorists in Sinai, and called for the tribes to be allowed to fight terrorists alongside the army.