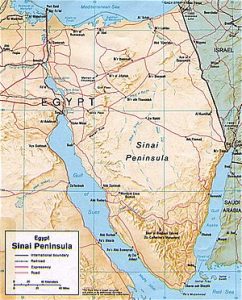 Israel has been conducting bombing raids on jihadists within Egypt’s borders since at least late 2015 as part of a secret two-year alliance. For more than two years, unmarked Israeli drones, helicopters and jets have carried out a covert air campaign, conducting more than 100 airstrikes inside Egypt, frequently more than once a week — and all with the approval of President Abdel Fattah el-Sisi, the NYT reported on Sunday.

Once enemies in three wars, and having struggled to reach peace agreements for decades, Egypt and Israel are now (not so) secret allies against a common foe, like reported by zerohedge.com.

In late 2015, jihadists in Egypt’s Northern Sinai moved in, killing hundreds of soldiers and police officers and briefly seizing a major town – setting up armed checkpoints as they established control over the area. On October 31, 2015, the Islamic State of Iraq and the Levant’s Sinai branch, formerly known as Ansar Bait al-Maqdis, brought down a Russian passenger flight with an explosive device – killing all 224 people aboard.

With Egypt seemingly unable to stop the jihadists, Israel – alarmed by the threat just over the border, began taking action – sending a barrage of airstrikes into the neighboring Arab country whose officials and media continued to vilify the Jewish state in public.

In order to conceal their involvement, Israel’s drones, jets and helicopters have covered up their markings. “Some fly circuitous routes to create the impression that they are based in the Egyptian mainland,” according to American officials briefed on the operations.

It is unclear whether any Israeli troops have actually set foot inside Egyptian borders.

Despite efforts by both Israel and Egypt to hide the origin of the strikes and censor public reports, Egypt and Israel’s two-year alliance has become somewhat of an open secret in intelligence circles:

Inside the American government, the strikes are widely known enough that diplomats and intelligence officials have discussed them in closed briefings with lawmakers on Capitol Hill. Lawmakers in open committee hearings have alluded approvingly to the surprisingly close Egyptian and Israeli cooperation in the North Sinai.

In a telephone interview, Senator Benjamin L. Cardin of Maryland, the ranking Democrat on the Senate Foreign Relations Committee, declined to discuss specifics of Israel’s military actions in Egypt, but said Israel was not acting “out of goodness to a neighbor.”

“Israel does not want the bad stuff that is happening in the Egyptian Sinai to get into Israel,” he said, adding that the Egyptian effort to hide Israel’s role from its citizens “is not a new phenomenon.” –NYT

Moreover, despite Israeli military censors preventing reports of the strikes from becoming public, certain news outlets circumvented the censorship by citing a 2016 Bloomberg report in which a former Israeli official admitted to drone strikes inside of Egypt.

The two-year alliance between the two countries is thought to have begun after Egypt’s relatively new president Mohamed Morsi – a leader within the Muslim Brotherhood who came to power after the Arab Spring revolt, was outed in a military takeover by el-Sisi – then defense minister.

Israel welcomed the change in government, urging Washington to accept it.

And Egypt needed the help; following Mr. Sisi’s takeover, Islamist militants who had established a refuge in the North Sinai region between the Suez Canal and the Israeli border began a wave of deadly assaults against Egyptian security forces.

A few weeks after Mr. Sisi took power, in August 2013, two mysterious explosions killed five suspected militants in a district of the North Sinai not far from the Israeli border. The Associated Press reported that unnamed Egyptian officials had said Israeli drones fired missiles that killed the militants, possibly because of Egyptian warnings of a planned cross-border attack on an Israeli airport. (Israel had closed the airport the previous day.)

At the time, both Israel and Egypt vehemently denied the reports – however after the Russian charter jet was brought down in October of 2015, Israel began its wave of airstrikes, killing a long list of militant leaders according to an American official who spoke on the condition of anonymity in order to discuss classified operations.

After Israel wiped out much of the jihadist leadership in the region, less ambitious successors stepped in. No longer employing armed checkpoints, closing roads or claiming territory – the group began targeting “softer” targets like Christians in Sinai and Muslims they considered heretics. As an example, the militant group killed over 300 worshippers at a Sufi Mosque in North Sinai.

Since Israel has effectively been keeping jihadists at bay in a mutually beneficial arrangement, some American supporters of Israel have been complaining that given Egypt’s reliance on the Israeli military, “Egyptian officials, diplomats and state-controlled news media should stop publicly denouncing the Jewish state.”

Israel’s prime minister, Benjamin Netanyahu, has also pointedly reminded American diplomats of the Israeli military role in Sinai. In February 2016, for example, Secretary of State John Kerry convened a secret summit in Aqaba, Jordan, with Mr. Sisi, King Abdullah of Jordan and Mr. Netanyahu, according to three American officials involved in the talks or briefed about them.

Mr. Kerry proposed a regional agreement in which Egypt and Jordan would guarantee Israel’s security as part of a deal for a Palestinian state. –NYT

Netanyahu scoffed at the idea – arguing that if Egypt was unable to control the ground within its own borders, it was hardly in a position to guarantee Israel’s safety.