You are here: Home / Mediterranean / Sickening new ISIS execution video threatens to take over Tunisia and wage war on the United States 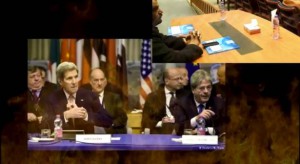 ISIS militants have released yet another threatening video via their media service this time threatening to take over Tunisia.

The six-minute video which also shows a string of world leaders also displays bomb making equipment, fire and sickening footage of a man who is about to be beheaded wearing an orange jump suit.

This latest video then goes on to show two terrorists wearing face coverings walking along what appears to be a leafy area stroking daggers – before then showing the disgusting murder of a number of men in a ditch.

And it seems that the film makers have been using computer-generated imagery in order to facilitate their shocking propaganda.

While the footage which has a voice over of a man speaking in Arabic is undated – it once again references their attempts to take over the world.

It calls on Muslims to attack both states and oust their ‘apostate’ democratic governments showing pictures of US secretary of state John Kerry and President Obama as well as a plethora of others.

Tunisia experienced its fourth deadliest attack of the year this week in which more than 50 people were killed.

Many in the country has become increasingly concerned both about the fate of its revolution and the violence.

Ten members of the security forces were killed in the fighting in the border town of Ben Guerdane, which Tunisian President Beji Caid Essebsi condemned as an ‘unprecedented’ jihadist attack aimed at ‘establishing a new Islamic State emirate’

Armed groups have expanded in Libya, taking advantage of the chaos there to set up training camps, and move into the unstable country.