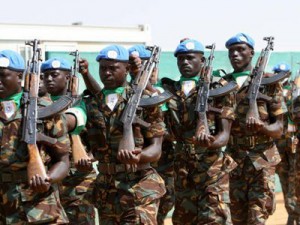 As the town stirred from its overnight curfew the morning of April 4, the last students of Garissa University boarded buses at the military airstrip under the watchful eye of Kenyan soldiers.

Rolling down the sole tarmac road that connects the northeast town to the rest of the country, the students chanted “Bye, bye Garissa!”, relieved to leave behind the violence-ravaged region along the Somali border.

They had lost scores of classmates two days earlier, when Al Shabab militants rampaged through their campus and killed 148 people, mostly university students who embodied the hopes of a rising generation. Now those who had survived were leaving for hometowns hundreds of miles away to attend funerals, grieve, and regroup.

The attack on Garissa highlighted Al Shabab’s deadly reach in Kenya, which has deployed peacekeepers to help pacify Somalia. And it revived a national debate over the wisdom of that participation amid a steady uptick in terrorist attacks on Kenyan soil.

Four years ago, 4,700 Kenyan troops entered Somalia, part of a 22,000-strong African Union peacekeeping mission to restore authority after more than 20 years of chaos. The mission, known as AMISOM, aimed to retake territory from Al Shabab, which espouses an extremist form of Islamist rule. The mission also planned to help expand the powers of the Western-backed central government in Mogadishu.

Kenya had another goal in Somalia: to make its territory safer after a spate of border incursions by Al Shabab and the kidnappings of aid workers and tourists. Yet this intervention has led to bloody reprisals, from a high-profile attack on a Nairobi mall in 2013 to a slew of killings of Kenyans on buses, in schools, and at mining camps. Critics call it blowback, and blame Kenya’s government for wading into a war it can’t win.

Previous missions in Somalia, like the initial effort in 2006 led by the Intergovernmental Authority of Development in Eastern Africa, had refrained from using neighbors’ troops in its mission. When AMISOM took over eight years ago, its reliance on troops from Somalia’s neighbors turned on its head the traditional international peacekeeping practice of drawing on troops from afar – Filipinos in Lebanon, Pakistanis in Congo.

The practice was based on worries about neighbors having their own interest in the outcome of a conflict. But terrorist groups like Al Shabab, Al Qaeda in the Islamic Maghreb, or Boko Haram in West Africa are showing that when peacekeeping forces come from neighbors with poorly policed borders, the war can quickly spill over to the homeland.

“You don’t, in any other mission, see the opposing group carrying out reprisal attacks in the troop-contributing countries because you’re not, in most peacekeeping operations, fighting a terrorist entity with cross-border goals,” says Adam Smith, director of the center for peace operations at the International Peace Institute. Country-led operations, as seen with the fights against Boko Haram or ISIS, are a different story.

But the ongoing threats have taken too great a toll for Kenya to sit back, say observers. Most recently, Al Shabab made at least two more incursions into Garissa, reportedly infiltrating the village of Yumbis long enough to hoist its flag and a few days later ambushing a group of Kenyan police.

“The strange part would be not having Kenya part of it in the first place,” says Ambassador Maman Sidikou, the head of AMISOM, to critics who question if neighbors should be used at all. “They should play their role and contribute to peace along their borders, to peace in Somalia, which also means peace for Kenya.”

Until 2011, Kenya had mostly played host – to refugees, peace conferences, and members of the Somali business community — and its intervention, an operation dubbed “Operation Linda Nchi” (“Protect the homeland”), ended decades of relative neutrality on Somalia.

“This intervention was sold on the fact that it would make Kenya safer. Whatever true intentions may have been – and there are many – it was sold as basically that we were going to protect ourselves,” says Cedric Barnes, Nairobi-based Horn of Africa project director for International Crisis Group.

But today, Kenyans do not feel any safer.  In October 2011, 26 percent of Kenyans said an increase in attacks was more likely as a result of the intervention, according to surveys by Ipsos Kenya. By December 2014, that had climbed to 55 percent.

Behind this fear is Al Shabab. Since 2013, it has attacked Kenya 63 times, according to data as of late April from the Washington-based Foundation for the Defense of Democracies. Slightly more than half of the 63 attacks in Kenya occurred in just Garissa, Wajir, and Mandera counties. Most of the rest occurred on the coast.

The AU’s Somalia mission wasn’t initially envisioned as a regional effort. The idea that neighbors were too invested to contribute still had traction. But Ethiopia invaded Somalia in 2006 to oust an Islamist government in Mogadishu  and protect its borders. That paved the way for the AU to absorb Kenya’s troops a few months after Kenya’s own unilateral intervention (Ethiopia withdrew from Somalia in 2009 and went in again under the auspices of AMISOM in 2014.)

Many experts say AMISOM is much more of a military force than a peacekeeping one – it is trying to defeat an enemy, not achieve a cease-fire between two warring parties.

“If you’re designing these missions as enforcement missions going after particular enemies, then it does make more sense to have regional players involved,” says Paul Williams, an associate professor at George Washington University in Washington, D.C., with a focus on international peacekeeping. “They’re going to have the will to take the fight to them in a way that these more distant countries do not.”

Kenya was also one of the only countries coming forward. Although Uganda and Burundi still contribute more troops than the 8,000 from Ethiopia and Kenya, AMISOM would have struggled to reach its mandated troop strength without their help.

Ambassador Sidikou of AMISOM, says Kenya’s security depends on achieving stability in Somalia and that it would be “unfortunate” if public pressure to pull out, which increased after the Garissa University attack, was heeded.

In fact, he hopes to see more peacekeeping arrangements like AMISOM’s. His own country, Niger, has sent troops into neighboring Nigeria to fight Boko Haram.

“Africans have seen an African problem and they came from Africa to solve it,” he says. “That’s the best model you can have.”

There was little public debate in 2011 about Kenya’s decision to go into Somalia. But now the pressure is mounting on the government to justify a continued military mission there.

AMISOM’s mandate – to shore up the weak central government and other institutions, including the national Army – has been met, to a degree.

But Kenya’s goal of “protecting the homeland” remains elusive: tourists are staying away and the currency is weakening. Curfews are in effect across the northeast and sometimes the coast, even as the country’s president pleads for the lifting of the US and Europe’s travel warnings. And as seen with Al Shabab’s continued incursions into the northeast, including a multi-hour stay in the town of Yumbis in Garissa in late May, attacks in the northeast are expected to continue.

“We are all people. We need a safe place to stay,” says Ifrah Aden Shidow, a Red Cross volunteer in Garissa who was one of the first on the scene the day of the Garissa attack in April. She knew many of the students well because she worked with the university’s Red Cross club.

Ms. Shidow scrolls through a WhatsApp group filled with messages from the deceased club members, including a couple harrowing messages sent from inside the university during the attack: “Are u safe? are u safe??”

Most of those students in the group are dead now, she says. Shidow saw some of them sprawled dead on the floor in the dormitories as she went searching for survivors.

“Those students were the future leaders, teachers, doctors, nurses,” she says. “We lost [148] leaders and that is a lot of loss to us.”