You are here: Home / MidEastGulf / Shootout breaks out between Islamic State militants and police in Turkey 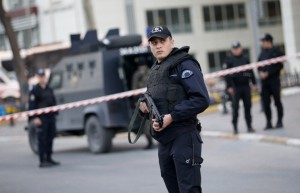 Shootout broke out between the militants of the “Islamic State” terrorist organization and the police in Turkey’s Diyarbakir province bordering Syria, Hurriyet newspaper reported.

Reportedly, two policemen were killed and four more injured as a result of the incident.

Moreover, four IS militants have been eliminated.

Turkey recently has been hit with a series of attacks. Two explosions occurred in Ankara Oct. 10 before the rally organized by trade unions and public organizations under the slogan “Work, peace and democracy” as a sign of protest against the violence due to the Turkish-Kurdish conflict in the country’s south-east.

The death toll reached 97 people as a result of the explosions and the number of the injured has reached 246.