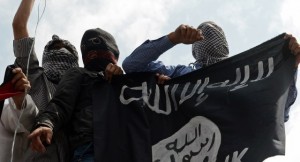 According to a new survey report, support for Islamic State of Iraq and Syria (ISIS) terrorist group has soared above 80 percent in Arab world.

The online survey was conducted by AlJazeera.net, the website for the Al Jazeera Arabic television channel.

The poll, which asked in Arabic, “Do you support the organizing victories of the Islamic State in Iraq and Syria (ISIS)?” has generated almost 60,000 responses.

The survey report revealed 81.3 per cent – or 61,145 people – voted yes to the question, in support of the Islamic extremists.

Only 19% of respondents voting “NO” to supporting ISIS, according to the survey report.

In the meantime, it has been reported that pro-ISIS Twitter accounts are believed to have promoted the poll by asking followers to vote in support the terror group.

The latest survey report by Al Jazeera comes as experts believe the terror group are likely to intensify their attacks as the one year anniversary of the so-called “caliphate” nears.

The group is believed to have controls over vast swaths of Iraq and Syria – from Palmyra to Raqqa and Deir Ezzor in the country’s west, a tract that the Syrian Observatory for Human Rights estimates to be 95,000 sq km.