You are here: Home / MidEastGulf / Shocking: ISIS fighters training six-year-old jihadi shoot at him with AK47

This is the shocking moment ISIS fighters training a six-year-old jihadi shoot at him with an AK47 while he crawls under barbed wire.

Footage believed to have been taken in Iraq or Syria shows the tiny child crawling through the dust under the sharp wire before a bullet kicks up the dust inches in front of him.

The terrified youngster cries out but carries on scrambling along the ground as a second gunshot kicks up the dust around him.

As he comes to the end of the brutal training exercise, the child stands up – only for a third bullet to ricochet off the ground in front of him amid cries of ‘Allahu Akbar’.

Men in military outfits can be seen standing by the side of the barbed-wire obstacle course.

At one point, part of an AK47 can be seen pointing towards the ground. It is not yet clear exactly where or when the footage was taken.

It is the latest example of children appearing in chilling ISIS videos. 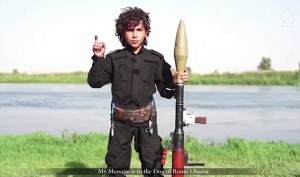 The boy, who is only about ten-years-old, tells US President Barack Obama he is ‘dreaming’ if he thinks American soldiers will enter the large swathes of land the terror group controls.

With one finger pointed to the sky – a hand signal which has become synonymous with ISIS – he warned: ‘Wake up from your sleep and pay the jiz’ yah (religious tax) in submission before the swords of the khalifah (caliphate) reach you and cut your filthy head.’