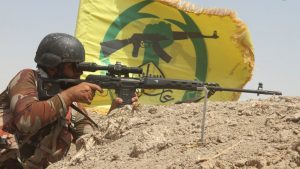 A Facebook page run by local Kurdish activists on Wednesday asserted that the Hashd al-Shaabi, also known as the Popular Mobilization Forces (PMF), had shelled Kurdish villages in the Hanjeer mountain range, east of the disputed town of Khurmatu.

There were no reports of casualties.

The security situation in Tuz Khurmatu drastically deteriorated since the PMF took control of the city, which is home to a mix of Kurds, Turkmen, and Arab minorities.

The militias have been launching mortar attacks on several Kurdish villages east and north of Khurmatu since the start of December.

Earlier this month, the Iraqi Observatory for Human Rights denounced the killing of seven people and injuring of 20 others, including women and children, as a result of the indiscriminate shelling in Tuz Khurmatu.

No group has thus far claimed responsibility for the attacks.

The bombardment of the villages is believed to be due to the presence of fighters who call themselves “The Liberation Army,” made up mostly of individuals from Khurmatu. The group was formed after the town and Kirkuk Province fell to Iraqi forces and the Hashd al-Shaabi militias on Oct. 16.

Khurmatu is one of many towns which continues to suffer from the instability and insecurity that followed the Oct. 16 takeover.

Dozens of thousands of people have been displaced, and thousands of houses have been looted, burnt, and destroyed according to local officials and international humanitarian organizations.