You are here: Home / MidEastGulf / Shia militias and the Iraqi military launches offensive to retake Ramadi 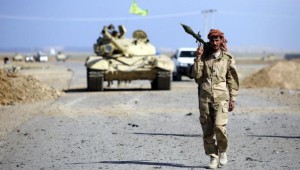 Shia militias and the Iraqi military clashed with Islamic State militants in towns near the city. Pro-goverment forces in Iraq launched a counter-offensive to retake the town of Ramadi on Saturday, a week after it fell under Islamic State control.
Clashes were reported in the east of the city, the main in the Anbar province neighboring Baghdad, in the towns of Siddiqiya and Madiq, which are now under pro-government control. At least 2,000 Shia militias have joined the Iraqi army in the new offensive.
A smaller number of Sunni tribesmen from the Anbar province are also fighting alongside the Shias and the government forces.  The United States military claimed Saturday that it had conducted 22 airstrikes against the Islamic State group in Ramadi, Iraq and Palmyra, Syria.
Iraqi troops and Shia fighters were also deployed to defend Khalidiya, a town east of Ramadi and just a few kilometers from the Habbaniyah military base. The surroundings of the base saw heavy fighting on Saturday. A United Nations spokesman said on Friday that some 55,000 people have fled Ramadi since it was stormed by Islamic State.
Analysts believe the Islamic State is trying to take more territory in areas surrounding Fallujah – one of Iraq’s largest cities, under control of the terrorist group – and Ramadi, which are barely some 50 kilometers away from each other, to build a logistic corridor for arms and troops supplies. This would ease an offensive to take Baghdad, the group’s publicly announced new target. Iraq’s capital city is around 80 kilometers away from Ramadi.