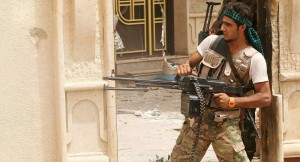 On Tuesday, at least 15 people were killed and 38 were injured in two blasts in the Iraqi capital Baghdad. One of the explosions took place at a checkpoint located along a route used by pilgrims going to Karbala.

The source added that pilgrims were not injured in the skirmish.

Hezbollah Battalions and other Shia groups protect pilgrims heading to Karbela to visit the grave of the Prophet Mohammad’s grandson.